Blocked in Petra: How I Dealt With a Creative Block in Jordan

You’re in Petra. Your guide, Mahmoud, leads you through the site, telling you all about the history and architecture of the various peoples that have inhabited the settlement. There are evidence of ancient drainage systems and Bedouins serenading the tourists or selling trinkets and souvenirs. Soon, you arrive at the entrance of the Siq – a canyon that winds through the red rock toward Petra’s famous treasury. He leads you through it, the towering walls sometimes crowding around the group. Eventually, Mahmoud stops the group just before another narrow section. He picks up a stone from the sandy canyon floor and tosses it to the other side.

“Stand there,” he says, with a knowing smile and a twinkle in his eye.

You do as directed, following your fellow photographers to the other side. You have a pretty good idea idea of what you’re about to see and the exclamations of those ahead of you confirm it before you set eyes on it yourself.

It’s the iconic image of the treasury through the narrow gap in the Siq. You smile and think to yourself wow, that’s amazing. I can’t believe I’m here.

Petra, Jordan. The iconic shot of The Treasury through the Siq.

That was not my first thought. My first thought, listening to the others’ excitement and camera shutters, went something like… well, shit. Actually, to be completely honest, it was fuck. The other thing may have been what I actually said out loud. I’ve never been able to pinpoint the specific moment a creative block happened, let alone almost physically feel it happen, but I did that day even as I raised my camera to take The Shot.

It’s no secret that I was not feeling well leading up to my trip to Jordan, and that only got worse as the trip progressed. So it’s not surprising that after a few days in Halifax, four days walking around France, and about five days into the Jordanian leg of my trip, I was starting to get a bit exhausted by the time we arrived in Petra.

But that wasn’t it, at least not completely. I’ve shot while exhausted before. The resulting photographs might not have been my best; I may have been lazy in my photography but, if I looked, I was still been able to see the shots, even if I was too lazy or too tired or in too much pain to bother taking them. This was different. I loved the photographs I took in Halifax and France. Shooting was easy in those locations. In Jordan, not so much. I struggled in Jerash. Wadi Rum was easy – it’s beautiful and begs to be photographed. But at Petra? My creativity was like “Fuck this shit, I’m out.”

That first look of the Treasury – The Shot – and the Treasury itself, are iconic images of Petra. An image search of “Petra Jordan” brings up an entire page of almost the exact same image. I thought how am I supposed to take unique, interesting images of Petra? How could I take photographs that would be “mine”?

I had no idea. For the remainder of the walk through the site and back to the bus I focused on my surrounds more than Mahmoud’s commentary, trying to plan and get ideas for the next day, when we would have a full day at the site.

Step One: Kill Expectations and Pressure

I was putting pressure on myself and I knew it. I’d felt it since I stepped off the plane in Amman. You see, I already had a photography show booked for 2019, one that I pitched as a Jordan show. While I haven’t spent a lot of time in the Middle East, I’ve really enjoyed the time I have spent there and the people I’ve met along the way. I wanted to have an exhibit that showed that other side of the region. Also, I needed images that had a chance of selling.

Thankfully, the director and I had left that fairly open; we’d finalize the theme closer to the show. So the first thing I did was decide it didn’t matter if I had any good photos from Jordan (for the purposes of the show, at least). If needed, I would do a Middle Eastern theme in general and, if all else failed, choose another theme entirely.

(I still had the pressure of spending $10,000 on a trip and needing ‘something’ to show for it. That’s there whenever I travel, though. I just remind myself that the experience is what I’m buying; the photographs are just the icing on the cake.)

Petra, Jordan. Light streaming through a break in the rock.

It may seem counter intuitive, but giving yourself rules and restrictions can be a life saver when you encounter a creative block. It helps you see and think differently and it’s helped me countless times in the past.

Creative block in writing? My go-to is ten 100-word stories based on word prompts. The final result may not actually match the prompt, but the prompt helps focus my ideas and lead me to the final destination. The 100-word limit is simply a way to: A. get through more prompts, faster and B. help focus the idea and brainstorming even further. Those little stories often suck, but sometimes turn out interesting and always lead to a plethora of new ideas and renewed creativity.

When that happens in my photography, the ideas are similar. I have a set of photography prompt cards to use when I’m close to home. As in writing, I might not always succeed in the actual prompt, but using it makes me look at my surrounds closer and I find other interesting objects and angles to photograph. I did’t want to use those in Petra because I get hyper-focused when I use them and I did actually want to explore and learn about the amazing site!

Instead I decided that, for at least the some of the day, I’d restrict myself by putting on my 70-300mm lens for a few hours. Normally when I do something like this, I only bring that lens. Of course, I didn’t do that here because, sure, restrictions are fine and all, but I would never be in Petra again.

Also, I decided to experiment with motion. You really can’t get away from the crowds at Petra, except for the first hour or so that the site is open to visitors. I decided to try and work with the hand I was dealt.

Petra, Jordan. Once the crowds began to arrive on day two, I experimented with motion.

Sometimes I just don’t have time for Step Three. With an entire day in Petra, however, I had the luxury of just sitting against a column in some temple ruins and watching the world go by. I took some photos while I sat there, if something caught my eye, but it was just nice to sit in the middle of everything and take it all in.

The others had planned a couple of hikes and I decided not to take part. It would give me more time to relax and experiment, but also I was exhausted.

In the end, I did end up doing one of the hikes (to the Place of High Sacrifice). I regret that, at least partially. It was an accomplishment (for me, anyway) but I was too focused on… not falling to my death… or getting lost… that I wasn’t really focused on the photography. Which, of course, was the reason I didn’t want to do the hikes anyway! 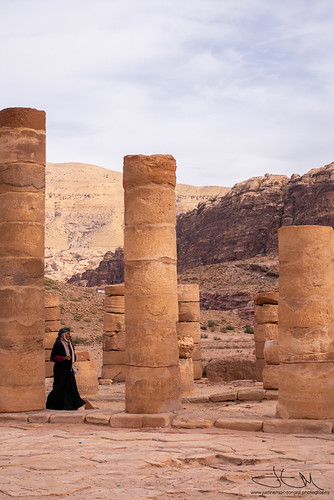 Petra, Jordan. Random shot taken while sitting against a column. 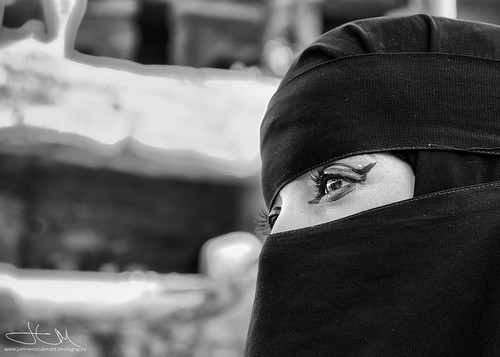 The block didn’t really end, even through the Dead Sea and exploring Amman. I did get a few good shots, but not as many ‘amazing’ ones as I’d hoped. Nevertheless, it was still an amazing trip! You can get a couple of recaps in two previous posts:

Check the gallery below to see the images from the trip.

And, yeah, I swore a lot in this blog post. It was a frustrating few days, okay!? Chill. :)

What are your go-to ideas for getting through a creative block? This site uses Akismet to reduce spam. Learn how your comment data is processed.

(I won’t spam you. Usually just two emails a month, unless I have something awesome going on!)

I'm a photographer & traveller based in Nova Scotia, Canada. I also enjoy science and history. Add a bit of Star Wars and cross stitch and you pretty much know what you'll see here. At the moment, my focus is architectural and abstract photography, with some event photography thrown in. I've appeared in several exhibitions. I look forward to sharing my photography with you!

You can help support my photography! Learn more here.